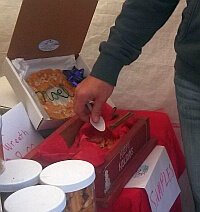 Well, I survived. I always wanted to do the 4th Avenue Street Fair in Tucson with my peanut brittle. I have been making and selling homemade peanut brittle for about forever. It is made in the shape of Christmas Wreaths, mostly, decorated and put into white sturdy pizza boxes. The Street Fair was to say the least an experience.
Did I make money? Well, yes, but not as much as I had thought I would.
It had been awhile since I had attended or looked at the street fair. The crowds are enormous. People go from Speedway to the bridge down 4th Avenue in droves and come back the other way in droves. I am convinced the crowds come a lot because the weather is usually great in Tucson this time of year. A lot of people attending the street fair are winter residents getting away from the cold northern climates.

I must say I was rather disappointed in a lot of the booths quality. If I was running the fair I would be much harder in the jurying of the booths. A lot of the booths were great and had a good appearance and good quality stuff. Unfortunately, many had the atmosphere and presentation of a flea market quality. This street fair has been around a long long time and in my opinion it ought to present a more professional higher quality vendor.
There was no help in getting me out of there after the fair was over either. The police seemed annoyed and bothered by the vendors trying to disassemble after the event. I ended up taking out my stuff by myself a block and a half in a hand cart. It was pretty impossible to drive down the street and pick up my stuff.
Will I do it again? I don’t know. It was physically and mentally exhausting. Besides, I rediscovered the fact that vendors for the most part are second class citizens for some reason. Its a shame because some of the vendors are really great artists and great art is important.