No Foot, No Horse

You are Here!:Home/Animals/Horse/Horse Foot Ailment/laminitis/No Foot, No Horse
Previous Next

No Foot, No Horse

“No Foot, No Horse” is a well known saying in horsey circles. Good horse care and stable management
can go a long way towards preventing laminitis which is sometimes referred to as founder.

It is a common foot ailment which can be caused by a lot of different factors.
The horse moves with short awkward steps and stretches it’s front legs forward and it’s hind legs under his
body. It puts most of it’s weight on it’s heels to avoid pressure on the front feet. This is due to the
inflammation of the laminae which are a sensitive part of the horse’s foot. 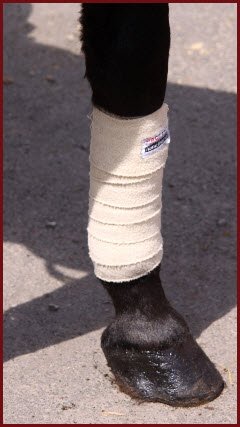 It is usually more pronounced in
the front feet. Sometimes the horse will have a fever and the hooves will be hot. There may be rings of
growth in the foot – these are signs of previous attacks of laminitis.
It is a painful condition and if it is allowed to deteriorate can result in pneumonia or infection resulting in
death or leading to the horse having to be humanely destroyed.
There are a number of causes of laminitis including:
• Prolonged standing on a hard stable floor
• Cantering or galloping on a hard surfaces or trotting fast for long distances
• A horse breaking into the feed store
• Incorrect feeding – a horse that is prone to laminitis should not be fed barley nor should it be overfed
• Fat ponies and horses especially those with flat feet are prone to laminitis
• It can also be caused by toxicity so pastures should be checked for poisonous plants before putting
horses out to grass.
• Over rich pastures – fat ponies should have their stable rations reduced and in the summer put on sparse
or limited grazing.
• A horse that has laminitic tendencies should not be put out to graze in Spring or late summer
• Some mares can become laminitic if some of the afterbirth has been retained after foaling.
•
It is important that a vet is consulted as soon as these signs have appeared because lack of treatment will
eventually lead to the horse being “stuck to the ground”. While waiting for the vet make the horse walk for
five minute to aid the circulation to the foot.
The vet will advise on treatment depending on the cause of the laminitis which may include keeping the
hooves well trimmed. In cases where the laminitis has become chronic I.e. the pedal bone has