It’s Time to Meet the Future of Meat

You are Here!:Home/3-D Pinting, Chicken, Corn, Environmental, Food, Meat, Poultry/It’s Time to Meet the Future of Meat
Previous Next

It’s Time to Meet the Future of Meat 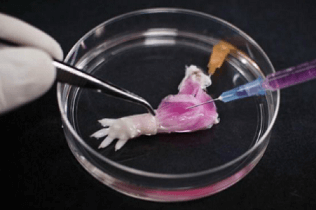 Nowadays we’re accomplishing miracles in the laboratory. It started, of course, with successful cloning, but we’ve moved on to teasing immature stem cells into making all sorts of tissues, such as skin for burn victims, miniature versions of human organs (called organoids) to learn to treat disease, and actual functional organs for lab animals that fulfill the function of a natural organ.

More interesting is something that was accomplished back in early 2015. Scientists at Massachusetts General Hospital grew a complete rat forelimb in a petri dish . Fingers/claws, skin, bones, nerves, blood vessels, and muscles all in the right place and functional. In theory, it could be attached to a subject and tested to see if nerve and blood vessels connections were reliable, and if the bones and connective tissue were durable. There is no reason that they shouldn’t be.

Meat in a Lab

Muscles, of course, are also referred to as meat, and would be fairly undifferentiated from a naturally occurring meat in texture or flavor. What would be the primary difference about meat made in a sterile laboratory? No animals would be slaughtered; there would be no parasites; there would be no fecal contamination; and, most importantly, there would be no antibiotics or growth hormones necessary.

There would be no vast tracts of land necessary, dedicated for the use of our current herds of animals. There would be no concurrent crops necessary to feed all these animals as they grew to a size appropriate for the abattoir, and then the local meat market.

There would be no need of veterinarian care for herds to treat diseases. It would eliminate animal suffering,because meat would not be sourced from animals at all.  In other words, by just about every popular definition, it would be completely Vegan meat.

Of course there are always doubters; those who think meat is bad and artificial meat would be inadequate for some other reason.  It’s very much like people that protest Genetically Modified Organism (GMO) foods—it makes no sense–since everything in our diet is a GMO.  There is virtually nothing in our diet that has not been changed. 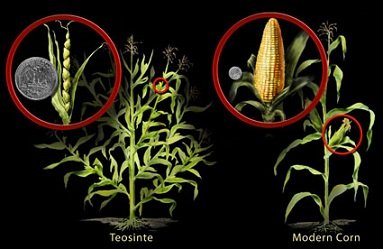 Everybody loves corn for instance, but 8,700 years ago in Mexico it was known as teosinte, with just a few grains per stalk that would have easily fit on top of a 25¢ coin.  We crossbred many teosinte with more grains than other plants, and eventually came up with the “cob” that was dense with grain.  Yet no one complains about GMO corn.

Lab grown meat is not even a GMO product.  It is completely natural cells, taken without harm to the animal, which are then simply nourished and allowed to grow.  It may be odd now, but in a decade or so it will be commonplace.  People will wonder about us once killing animals for meat.  But that isn’t the end of it.

In January of 2017, the Universidad Carlos III de Madrid printed the first totally functional human skin with a 3D-printer . It comes in two varieties, one suitable for biological testing, especially for chemicals or makeup so that we no longer need animals for that purpose; the second type, created with your very own stem cells, can replace damaged skin. We’ve been able to do this for burn victims for a number of years by growing it in a dish, but it takes three weeks or more. This printer can do it in 35 minutes.

What shall I print for dinner? 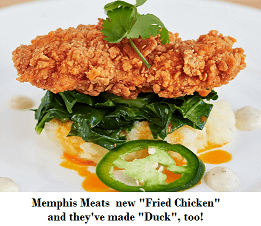 May 2017 brought us the story from Australia about 3D-printed meat[i] in this video.  As it likes to point out, we’re no more than a decade or two away from every First or Second world kitchen having one as standard equipment.  With the added bonus of using economically manufactured artificial meat, how long will it take for us to bring the Third world up to that standard?

And although pseudo-beef is bound to be a favorite, NASA has already experimented with growing turkey and (gold) fish fillets (outside of a fish)[ii] and the Modern Agriculture Foundation is working on a project called Future Meat growing complete chicken breasts in a vat (actually a bioreactor).

Originally, the first burger was produced (at a cost of $330,000 for a single patty) in 2013.  The experimental burger was composed entirely of muscle fibers grown in the laboratory.  They did not grow any fat cells with the muscle cells, a situation that does not occur in nature.

The first tasters both reported that it was genuinely chewable, and tasted like meat, and that the cooking produced the familiar Maillard reaction (the browning of cooked food responsible for meat’s unique flavor).  Unfortunately the complete lack of fat was a strong negative.  Since that time, researchers have been working out ways to include the proper amount of fat and are apparently succeeding.  Mark Post, the Dutch scientist behind the 2013 cultured hamburger, is working on the fat content of lab-grown beef.[i]

As we get more sophisticated, we ought to be able to make structured meat, characteristic of a fine steak.

For now, expect to see products akin to processed meats like hamburger and sausages.  Fish is on the way and in March 2017 we were presented with Memphis Meats’ new cultured fried chicken and duck.[i]

The meat industry contributes 18% of our total Greenhouse Gas (GHG) emissions annually[ii].   Reducing it, or eliminating it, would be a giant step forward in terms of cleaning up our environmental footprint.

Most people don’t realize the energy requirements of producing the 100 pounds of meat that we (on average) each consume annually.  For example, the livestock herds consume 7 times more grain than the entire balance of the U.S. population; fossil fuel is consumed in a ratio of 25:1 for edible meat calories whereas corn is only 2.2:1; and comparing meat to grain protein reveals that it takes 100 times the amount of water to produce meat, as it does to produce the energy-equivalent in grain.[iii]

Back in 2011, the Food Climate Research Network[i] proposed that Cultured Meat would consume up to 45% less energy, create up to 96% fewer GHG emissions, 99% lower land-use, and up to 96% less water-use to produce an equivalent product.

According to the United Nations, between 2000 and 2050, demand for meat is going to double, and exceed our ability to produce it in the traditional way.  Cultured meat will be safer, cleaner, healthier, and cheaper to produce.  More people will be able to get sufficient nutrition, leading to improved health, increased ability to learn, and less reason than ever to enter a life of crime.

And if you’re worried about what is going to happen to all of the ranchers, don’t bother.  Most of them have already figured out that this is the path to follow, and if they’re not involved in the actual development, they’re investing in it.  They are already “meat experts” and they’ll probably end up running the whole thing!

Now I think – I feel like having a steak!

CountyFairsUSA....is the blog of Countyfairgrounds USA. We cover topics in this blog pertaining to anything having to do with County and State Fairs, Festivals, BBQ, Music and other pertinent event stuff.I would love you to contribute. To do so please send me an email at - karen@countyfairgrounds.net. I am looking for regular authors. We are also open to paying for special articles for this website.

Other topics on County Fairs USA